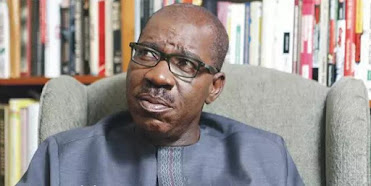 The Edo State Governor, Mr Godwin Obaseki, on Monday urged the state Commissioner of Police, Johnson Kokumo, to appeal to officers and men of his command to return to their duty post  o secure lives and property of the citizens of the state.

The governor made the appeal during a solidarity visit to the state command headquarters in Benin after #EndSARS protest that led to the destruction of lives and property including the burning down of the police stations.

Obaseki noted that the absence of policemen on the on the roads could easily be interpreted by the hoodlums who hijacked the good intentions of the #EndSARS protests as weakness and cowardice on the part of the police.

“Edo State government will now proceed immediately to begin to rebuild your destroyed buildings. We have already ordered some patrol vehicles and we hope it will be delivered in the next few weeks. We will be responsible for the hospital bills of every officer who have been hurt in the last few weeks”, he said.

The governor said the inmates who escaped would certainly be rearrested, while the cases of those who stayed back would be reviewed.

Earlier, the Commissioner of Police, Johnson Babatunde Kokumo, said about 11 policemen were injured, addig that the command arrested 126 suspects, 10 of which were inmates who escaped from the correctional centres in the state.