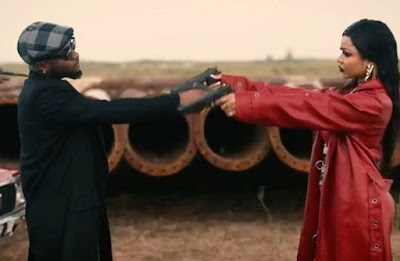 Davido has released the visuals to ‘Jowo’, a track from his ‘A Better Time‘ studio album, featuring Richard Mofe-Damijo (RMD), an ace Nollywood actor, and Nengi, a 2020 BBNaija reality TV star.

The video, which was released on Friday, is directed by Apampa Oluwadamilola better known as Dammy Twitch.

In ‘Jowo’, Davido is seen wearing a black suit as Nengi dresses in a leather tube paired with shorts and a jacket. It portrays both parties as influential figures flanked by an entourage of armed operatives who confront each other.

The video also features a scene where a pistol is pointed at Davido’s head and another where the trigger is pulled.

CHECKOUT:   No degree is worth your mental health! Nigerian lady says as she quits med school

‘Jowo’ will be coming on the heels of the success recorded in his ‘A Better Time‘ album, which enlisted prominent music heavyweights including Nicki Minaj, Chris Brown, Nas, Young Thug, Tiwa Savage, Mugeez, and CKay.

Speaking on his achievements in the music space, Davido had said: “When we were kids, Africans were made fun of. When I was going to Nigeria for holidays people would joke, like ‘Africa, how are you getting there, by boat?

“But now they’re the ones coming here. Everyone wants what we bring to the table. When I first signed to Sony in 2016 that was kind of my aim, to get validation from the western world. I wanted plaques, and to go No 1 all over.

“Sometimes this pressure to make music that will be popular elsewhere makes you do things differently, but really you have to make the world come to you.

“My biggest single in the US is Fall, which I did by myself, not with all the features with US artists. It’s local, it’s Nigeria. You realise that’s what people in different parts of the world appreciate: being yourself.”

Watch the video below: