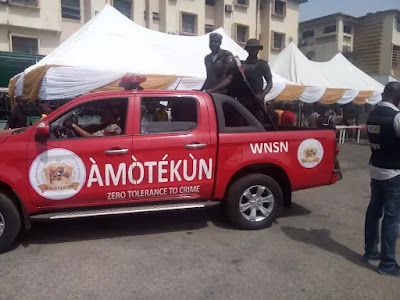 No fewer than seven people have been confirmed dead after operatives of Amotekun engaged some Fulani herdsmen in Oyo State.

The incident reportedly occurred at Aiyete in Ibarapa North Local government area of the state on Saturday.

The clash started at Okebi village in Aiyete but the cause of the fight was not ascertained as at the time of filing this report.

Seven people were reportedly killed during the clash and no fewer than seven houses razed.

Three people were killed during a clash between the Amotekun Corps and some youths in Tapa town.

An undergraduate of the University of Ibadan was last month allegedly killed by Amotekun Corps operatives.

An operative of the Amotekun Corps shot a police officer in Oyo town last month.

The state governor, Seyi Mankide had yesterday, promised not to spare any of the members of Amotekun Corps who run afoul of the law.

Amotekun Corps Commandant, Col. Olayinka Olayanju who confirmed the latest clash said he was on his way to the area.

Olayanju said, “I heard the same thing and I am on my way there now.”

Rapper 21 Savage’s brother is stabbed to death in London