Adamu can remain as IGP till 2023, says Buhari 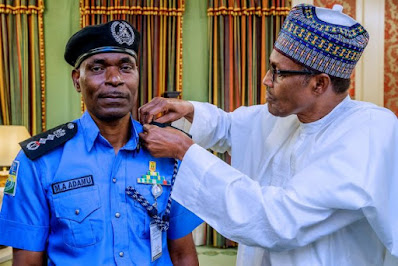 President Muhammadu Buhari and Abubakar Malami, attorney-general of the federation, say the law permits Mohammed Adamu, inspector-general of police (IGP), to remain in office until either 2023 or 2024.

Adamu, who was appointed in 2019, clocked the mandatory 35 years of service on February 1, and was expected to have been replaced by the president.

Maxwell Opara, a legal practitioner, in a suit marked FHC/ABJ/CS/106/21, took the IGP to court contending that by virtue of section 215 of the Nigerian constitution and section 7 of the Nigeria Police Act, 2020, Adamu cannot continue to function as the IGP, having retired as a serving member of the force.

However, in his defence, the IGP told the federal high court that the new Nigeria Police Act gave him a four-year tenure, which would only lapse in either 2023 or 2024.

The IGP through his counsel, Alex Iziyon, argued that his tenure will lapse in 2023 if counted from 2019 when he was appointed as the IGP or 2024 if counted from 2020 when the new Nigeria Police Act came into force.

He said the provision of “section 18(8) of the Nigeria Police Act, 2020 which is that ‘Every police officer shall, on recruitment or appointment, serve in the Nigeria Police Force for a period of 35 years or until he attains the age of 60 years, whichever is earlier,’ is with due respect, inapplicable to the office of the inspector-general of police in the circumstance.”

Iziyon submitted that the IGP “is only accountable to the President of the federal republic of Nigeria and the Nigeria Police Council and this fact we submit makes his office a quasi-political office with a tenure of four (4) years pursuant to Section 7(6) of the Nigeria Police Act, 2020”.

Supporting Adamu’s position in a joint response to the plaintiff’s suit, the president and AGF said they totally adopt all points made by the IGP counsel.

Their joint response was filed by Maimuna Shiru, a lawyer in the AGF’s office.

“My Lord on the above issue, it is our position that we will be relying and aligning with the argument canvassed by the 2nd defendant’s (IGP’s) counsel as their issue two in paragraphs 1.18 to 1.49 of their written address and we shall be adopting same as ours and urge this honourable court to uphold our argument and dismiss the plaintiff’s case as same is frivolous,” the written address read in part.

They said the constitution conferred on the president executive power to “appoint serving police officer as the inspector-general of police in consultation with police council”.

Responding to the claim that the IGP is no longer a police officer, the president and AGF said neither the Nigeria Police Council nor the Police Service Commission “have disclosed any contrary fact that the 2nd defendant (IGP) is not a serving police officer”.

“The plaintiff has failed to discharge the legal burden of proof that the 2nd defendant is not a serving police officer for the purposes of extension of his tenure in office,” they said.

“That question if the 2nd defendant is still a serving police officer is a question of fact.

“That it is a fact that the Nigeria Police Act 2020 is a subsidiary legislation passed by the National Assembly.

“That it is a fact that the appointment of an inspector-general of police is by the constitution conferred on the president of the federal republic of Nigeria.”

They asked the court “to dismiss this suit and uphold our argument in support of the view that the case of the plaintiff is frivolous, unmeritorious and undeserving of the time of this honourable court’s attention”.

They also prayed that “heavy cost” should be awarded against the plaintiff.

Ahmed Mohammed, the judge, has fixed March 30 for hearing.

I know you are angry, but we must work together – Tinubu tells youths

Insecurity: I will never be silent – Mbaka dares Catholic church

I am not Alaafin of Oyo’s new wife: Woman debunks viral news