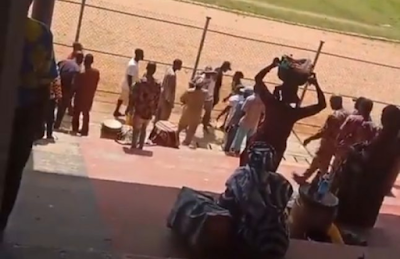 What seemed like chaos was on Friday averted in the main bowl of the Osogbo City Stadium as the Osun State Football Association insisted on enforcing the Covid-19 guidelines before the kickoff of a match between Ojaja FC of Ile-Ife and Olashile FC of Osogbo.

Tajudeen Ahmad, the media officer of Osun United who spoke to Daily Post over the telephone on the incident revealed all that the Osun FA sought to enforce was the Covid-19 protocols as stipulated by the National Centre for Disease (NCDC).

Ahmad said, “There was a playoff scheduled for the Osogbo Township Stadium between Ojaja FC of Ile-Ife and Olashile FC of Osogbo and the rules of the FA posted both on WhatsApp and Twitter yesterday was that we were going to observe the COVID-19 guidelines according to the directives of the Nigerian Football Federation (NFF).

“They did not allow fans to come and watch any of these games. Of course, both teams have their fans who wanted to watch the match live. The FA did not allow them to enter the stadium.

CHECKOUT:   Merrymaking banned in Warri for 3 months over death of Olu of Warri, Ogiame Ikenwoli

“That was what I heard and you know people would not be happy about that type of decision. I did not hear about any casualty or fracas about the incident. All I know is that when the fans that were in the main bowl before the match kicked off were asked to go out, they protested that they will not leave while the FA was trying to maintain the rule. That was what led to a brief misunderstanding between the FA, stadium security and the fans

“Later, they a went out because they have to comply with the COVID-19 guidelines.”

CHECKOUT:   NYSC confirms when verification of foreign-trained graduates will begin

This according to him led to the team being banished to Ilorin adding that the FA will not take it lightly with any team that wants to disregard the rules from NFF or from NNL.

“That was the reason the FA stood their ground that everybody in the main bowl will have to go out before the match kicked off. Even when the NNL begins, the FA will not allow any fans to enter into the main bowl to watch any match because NFF just lifted the banishment after a meeting yesterday in Abuja.

Nigerian traders in Ghana raise alarm over closure of shops