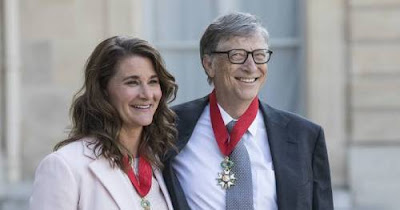 As the announcement of Bill and Melinda Gates’ divorce after 27 years continues to gather mammoth reactions across the world, Nigerians have expressed mixed feelings too over the billionaire couple’s sudden break-up.

Bill had tweeted that they were getting divorced after 27 years of marriage, saying “we no longer believe we can grow together as a couple”.

“After a great deal of thought and a lot of work on our relationship, we have made the decision to end our marriage,” the pair wrote on Twitter.

The two had met in the late 1980s when Melinda joined Bill’s Microsoft firm. They have three children. They jointly run the Bill & Melinda Gates Foundation.’

While some Nigerians on Twitter noted that it was their personal decision that should be respected, others felt it reflected that Nigerian parents who endured hardship deserved a credit.

For instance, @EmemXavierAtats said, “Our parents who spent over 40 years plus together on an average income in a very harsh Nigerian economy deserves a ‘Nobel Prize in Marriage’ if at all there’s anything like that. I need to get their past questions on how they managed to stay those years together.”

@iamscorefield said, “Mature life. They both decided to move on. Decision hard to make, but it’s the best way to dwell.”

CHECKOUT:   Fears of epidemic in Ogun secretariat over collapse of sewage system

@girl4gorgeous said, “Congratulations to them. Can we move on to the next topic please?”

@OJ_Ibiloye wrote, “With the divorce of Bill and Melinda Gates, Adekunle Gold’s #IIWII makes more sense to me: ‘Money no dey bring happiness.’ I wish the two happiness in their new phase of life.

@BoBoBillionair1 noted that the “Gates can’t be shot for long… Someone has to open it.”

@musajidda said, “If Na Nigerians, even if their fight reach this level, they go settle.”

@ChineduIgadi said, “God has a way of paying everyone for his good deeds and his bad deeds, killer vaccines have turned to killer of marriage, God is a just God.”

@matfellony said, “When one window closes, another window opens.”

Video: Man allegedly sent to jail by half sister cries out