Uzodimma to critics: Allow Buhari to function — it’s his time 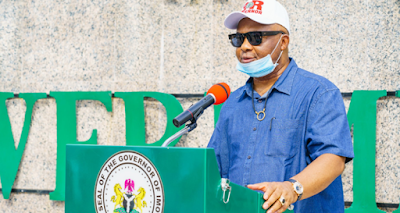 Hope Uzodimma, governor of Imo state, has urged those he described as aggrieved politicians to allow President Muhammadu Buhari to focus on the task of leadership.

Speaking when he featured on Politics Today, a Channels Television programme, on Wednesday, Uzodimma argued that the spate of attacks witnessed in different parts of the country was a “sponsored programme” to discredit the Buhari-led administration and the All Progressives Congress (APC).

The Imo governor, who had earlier insisted that the attacks on security facilities and his residence were politically motivated, noted that the rising insecurity in the country is designed against the APC as a result of the 2023 elections.

“I want to challenge these politicians who are aggrieved, who had the opportunity they couldn’t deliver, to think twice and save our country because the unity and interest of this country are more important than any individual interest,” he said.

“I want to say politics must be played with some level of decorum. People must have conscience; people must do things with the fear of God.

“This government of President Muhammadu Buhari should be allowed to function. All of us cannot be president at a time; it must be one person at a particular time. Now, it is the wish of God that he is the president. Let us support him and build our country.

“By all indications, this is a sponsored programme by some people and it is targeted at the government of President Muhammadu Buhari and APC. And the whole idea is to discredit this government whether rightly or wrongly with a view of the election coming up in 2023, to see how they can put in a new government.”

‘BUHARI IS NOT NATIONAL ASSEMBLY’

The governor also called on those clamouring for state police to meet with the national assembly, noting that the president does not have the power to amend the constitution.

“You do not blame challenges of governance when it has to do with security on President Muhammadu Buhari, because he is not the author of the 1999 constitution as amended,” he said.

“I was in the seventh senate. We did everything to amend the constitution to allow for state police. We carried out public hearing; it was voted out.

“In the eighth senate, we did everything to allow for state police. It was voted out. President Muhammadu Buhari is not the national assembly; he cannot work outside the constitution he swore an oath to defend.

No where is safe outside Maiduguri -Borno elder debunks lies of military, FG