Buhari should speak to us… we didn’t vote for Garba Shehu, Femi Adesina -Dino Melaye 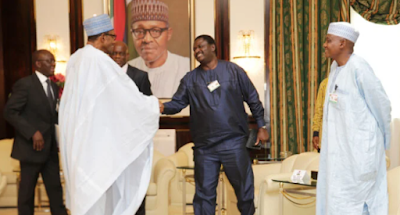 The Peoples Democratic Party (PDP) chieftain said the president cannot continue to speak to Nigerians through his spokespersons.

He said Buhari’s silence is detrimental to the war against insecurity in the country.

Melaye spoke on Friday during an interview on Africa Independent Television’s (AIT).

“President Buhari needs to speak to Nigerians directly, he needs to communicate with the media. Our president is absent, and this has negative concomitant effects on the war against insecurity in the country,” he said.

“It is very pathetic, but our president is not available. All we hear is presidency says, we didn’t vote for Garba Shehu or Femi Adesina.

“All our security challenges boils down to leadership failure, the president of the Federal Republic of Nigeria is grossly incompetent, not capable and all I expect is that since this man has shown more than enough evidence that he has no capacity to run this country.

Speaking on the APC senators’ decision not to join their PDP counterparts’ call to impeach Buhari, he said the 9th assembly is a creation of the president, and will always carry out the dictates of the presidential villa.

CHECKOUT:   Only Yoruba Obas can decide if there will be Oduduwa Nation or not - Oluwo of Iwo

“It is evident in the national assembly decision not to impeach Buhari, despite the array of insecurity, and gross display of incompetence by this government.”

Oritsefemi vows to die untimely if he committed adultery yesterday, admits to sleeping with his ex-manager

Before I fled Boko Haram’s den, many schoolgirls were pregnant – Escapee

‘200 girls defiled in Gombe state in one year’