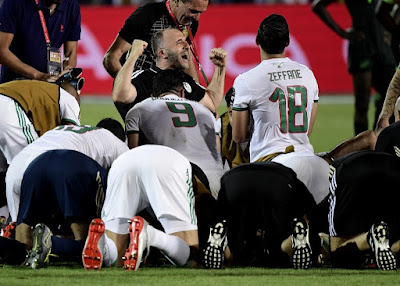 Captain Riyad Mahrez scored as Algeria defeated Tunisia 2-0 in an international friendly this weekend to create a record 27-match unbeaten run by an African national team.

An Ivory Coast side that included Yaya and Kolo Toure and Didier Drogba set a 26-match benchmark in 2013, and Algeria began their remarkable run by winning 4-1 away to Togo five years later.

They faced 24 opponents from Africa plus Mexico, Colombia and Qatar, played nine matches at home, six away and 12 at neutral venues.

Facing Tunisia away was a huge challenge as reigning African champions Algeria sought to overtake the mark set by the Ivorian ‘golden generation’.

The Tunisians are ranked second in Africa, two places above Algeria, had home advantage and took a 12-match unbeaten run into the north African showdown.

But Algerian fears that they might trip at the final hurdle were soon allayed as Qatar-based Baghdad Bounedjah and Manchester City winger Mahrez scored within 28 minutes of the kickoff.

Rattled after conceding twice, there was no way back for the hosts against an Algerian defence marshalled by Aissa Mandi and Djamel Benlamri.

The centre-backs were among eight starters in Rades who also began the 2019 Africa Cup of Nations final against Senegal in Cairo, which Algeria won 1-0 through a Bounedjah goal.

AC Milan midfielder Ismail Bennacer missed the wins over Mauritania, Mali and Tunisia this month due to a foot injury that required surgery.

Right-back Mehdi Zeffane and midfielder Adlene Guedioura were the other absentees and Youcef Atal, Ramiz Zerrouki and Haris Belkebla took their places.

Guedioura did come off the bench during the second half only to be red-carded two minutes from the end of regular time.

CHECKOUT:   Bawa didn’t advise INEC not to sell forms to anyone —EFCC

The line-up was composed exclusively of Algerians based in Europe and the Middle East, including three playing in France and two in Qatar while Mahrez the sole English Premier League representative.

Having broken the African record, coach Djamel Belmadi can now adjust his sights to the 36-match world mark set by then world champions Brazil in 1996.

Algeria are scheduled to play back-to-back 2022 World Cup qualifiers in September, October and November in a group that includes Djibouti, Burkina Faso and Niger.

The toughest of the six fixtures should be the visit to Burkina Faso, who defeated Algeria the last time the countries met in a World Cup qualifier in Ouagadougou.

Algeria will then defend the Cup of Nations title from January 9 in Cameroon, where they hope to become the first country since Egypt in 2010 to successfully defend the title.

Alex Ekubo and his US model girlfriend are engaged [photos]