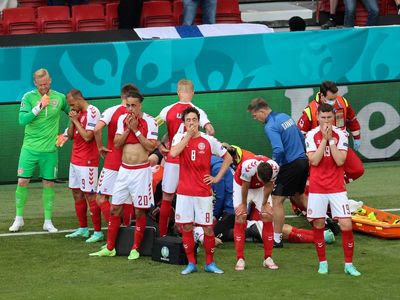 Denmark midfielder Christian Eriksen remained in hospital but is in a “stable” condition after collapsing in his country’s  Euro 2020 game against Finland on Saturday, the Danish Football Union (DBU) said Sunday.

“This morning we have spoken to Christian Eriksen, who has sent his greetings to his teammates. His condition is stable, and he continues to be hospitalized for further examination,” the football body said in a post to Twitter.

DBU also said that the team and staff had “received crisis assistance and will continue to be there for each other after yesterday’s incident.”

CHECKOUT:   Any army sent to Biafraland will die there – Nnamdi Kanu replies Buhari

He laid on the field for about 15 minutes before being carried off the pitch and rushed to the hospital.

The game was temporarily suspended awaiting confirmation that Eriksen was alright but after reports that the player was in a stable condition and awake, the game was resumed later in the evening, ending in a 1-0 win for underdogs Finland.

A Sunday press conference with the DBU was cancelled in the morning and the team’s scheduled training session has also been postponed indefinitely, broadcaster TV2 reported.

Acting as ‘ritualist’ doesn’t make me one –Kanayo O Kanayo