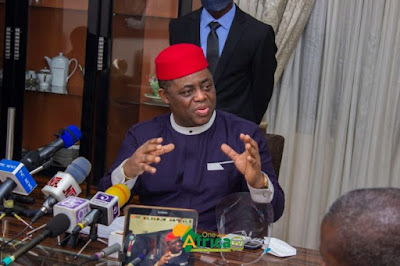 The Falcons, while on a train, were accused of failing Nigerian youths by representing ‘a terrorist government’.

In a viral video, he accused President Muhammadu Buhari’s government of kidnapping Nigerian youths and killing them.

Reacting on his Instagram page, Fani Kayode queried why the Falcons travelled by public transport in a foreign country.

He also wondered why they had no bodyguards and some security especially because they are women representing the nation in a foreign land.

CHECKOUT:   Some of IPOB’s grievances are valid, they should be addressed squarely -Ikpeazu

He further stated that no matter how anyone feels about President Muhammadu Buhari or Nigeria, It is despicable to attack and subject the players to such a vicious verbal assault.

”If he were a foreigner and not a Nigerian he would have been rightly accused of being a racist. He is nothing but a grubby little foul-mouthed and rude self-hating Uncle Tom,” he said.

”Things may be tough in our country and we may be going through hard times but no one has the right to insult, humiliate, threaten, talk down to and treat our people with contempt and disdain. Not even a fellow Nigerian that is stuck abroad!

”The man deserves a hot and dirty Nigerian slap for his impudence and insolence. Pity that none of the young Nigerian men in that bus that were subjected to his foul-mouthed and self-hating rubbish didn’t give him one.”