2023: Tinubu, Yahaya Bello should be PDP’s headache not Buhari 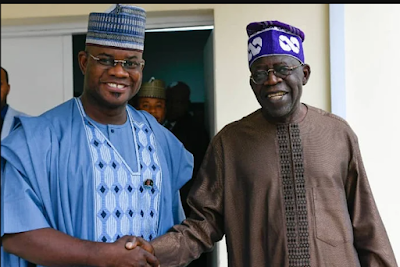 A former spokesman for the Atiku Campaign Organisation, Segun Showunmi, has said that the National Leader of the All Progressives Congress, Bola Tinubu, and Kogi State Governor, Yahaya Bello should be the “headache” of the Peoples Democratic Party.

He said the President, Muhammadu Buhari, would not be the headache of the opposition party in the 2023 election as being insinuated.

The PDP chieftain said this in an interview with Channels TV’s Politics Today, adding that Buhari cannot be a successful candidate in any election.

When asked about the chances of PDP winning the 2023 election, he said, “There are only two people in the APC that give me a headache. I’m worried about Governor Yahaya Bello because of some of the footprints I see him doing, he is young, and can connect to the right audience and I’m worried about Bola Ahmed Tinubu because I know the huge political infrastructure he has.”

He also argued that Buhari would not have defeated former President Goodluck Jonathan and former Vice-President, Atiku Abubakar, in the 2015 and 2019 presidential elections without the support of Tinubu.

“The APC did not win the PDP in 2015 because of the party in itself; they won in 2015 and 2019 because of the support of former Governor of Lagos State, Bola Tinubu,” Sowunmi added.

African lesbians fight dirty as one drags the other to court ”please help me, don’t let her kill me”