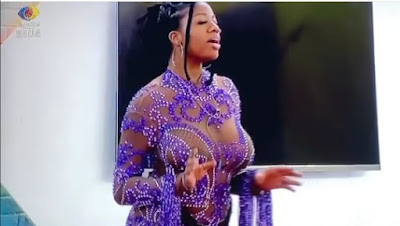 Father to Big Brother Naija Shine Ya Eye housemate, Angel, has hailed his daughter for her outfit at the fashion show held in the BBNaija house.

During the fashion show, Angel, who was the host of the event, got tongues wagging with the lacy see-through mini dress she wore without underwear.

Her father, who is also her Instagram handler, as she earlier revealed, praised his daughter for her outfit, saying that Angel’s dress depicted body positivity.

He shared a video of her on the page and wrote, “In case you missed this. Body positivity.”

CHECKOUT:   FULL VIDEO: I am broken, i cannot go out on the streets again - Tega's husband cries out

This came after several reactions from Twitter fans about the revealing dress.

A tweep, @kuukuaV said, “It’s either you accept Angel for who she is cos she’s staying for 72days. Expect more nudity and fine legs”

Another tweep, @dankachi3, said, “Angel’s content is being naked.”

As one of the contestants of the show, Angel has always managed to keep her name on viewers’ lips.

On her first night of the show, she cuddled with Sammie, an act that got people talking and led to a potential ‘ship’ between them.

During the Truth or Dare game, Angel also kissed Boma and Saga passionately while her love interest, Sammie, looked on.

On Monday, Cross had revealed to the housemates that Angel had walked in on him having his bath and she stripped and had her bath in the same place.

I want Joshua next, I’ll knock him out inside 3 rounds – Tyson Fury boasts