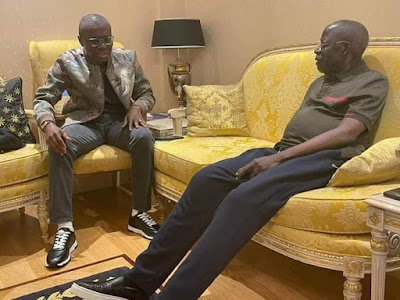 Governor Babajide Sanwo-Olu of Lagos State has reacted to reports that Bola Tinubu, National Leader of the All Progressives Congress, APC, is dead.

He spoke on the sidelines after inaugurating 102 compactor trucks and 100 double dino bins acquired by the Lagos State Waste Management Authority (LAWMA), on Wednesday.

The governor had visited Tinubu a few weeks ago in London.

Speaking on his meeting with Tinubu, Sanwo-Olu said they discussed issues regarding happenings within the APC.

He said: “My going to see our leader was really around the rumours flying around about him.

“He is well and healthy. We discussed happenings in our party and country at large. All is well with him as I saw myself and there is nothing to worry about.”

Tinubu was recently rumoured to have died during his medical trip abroad.

However, his media aide, Tunde Rahman, had denied such reports, stressing that the APC National Leader is still alive.