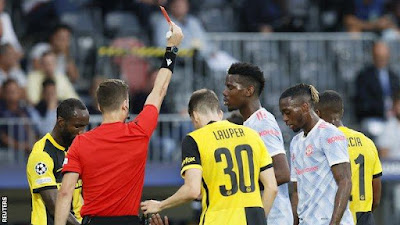 Cristiano Ronaldo scored on his Champions League return for Manchester United but it was not enough as Young Boys struck in stoppage-time to cap a remarkable comeback win.

Ronaldo, who became the joint all-time Champions League appearance holder on his 177th appearance in the competition, fired his side ahead after an exquisite pass from fellow Portuguese Bruno Fernandes.

United played for almost an hour with 10 men after Aaron Wan-Bissaka’s dangerous challenge on Christopher Martins earned the defender a straight red card.

They looked set to hang on for a point in an entertaining match after Cameroon winger Moumi Ngamaleu’s equaliser but a mistake by substitute Jesse Lingard allowed Jordan Siebatcheu to score the winner deep into stoppage time.

CHECKOUT:   Video: Super Eagles players vibing as they travel from Lagos to Benin Republic by boat

Days after her ex showed off a new girl, Juliet Ibrahim talks about dating independent women