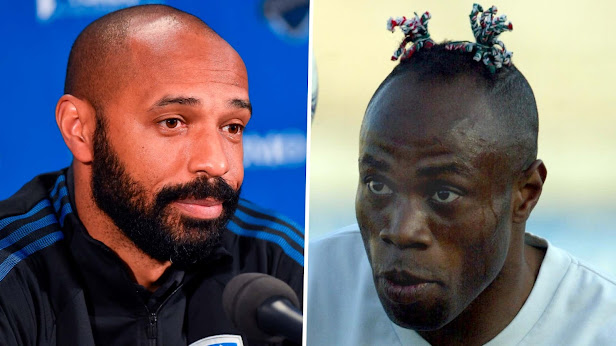 Ex-Super Eagles centre-back Taribo West has responded to France legend Thierry Henry’s comments that he was the defender he dreaded most during his playing career.

The Arsenal legend, while speaking on CBS Sports on Tuesday, admitted he endured a torrid time against the Nigerian centre-back during his active days.

Despite being rated as one of the most potent strikers of all time, Henry, now the assistant coach of Belgium, admitted Taribo was the hardest opponent he played against.

“For direct opponent, I would go back in the days – Taribo West,” Henry said. “Because at Auxerre, they did man-marking. He followed you everywhere, even in the dressing room.”

Renowned for his unusual and colourful hairstyles, the former Inter Milan star praised Henry for his qualities but said he never gave him the chance to score against him, just like he did to other top strikers.

CHECKOUT:   Piers Morgan storms off set after being called out for ‘diabolical’ behaviour towards Meghan Markle [video]

“While I was in France, Auxerre manager Guy Roux assigned me to always man-mark Thierry Henry until he moved to Juventus where he was not really a regular. I also moved to Inter Milan,” Taribo revealed.

“During the time I played against him, Henry was a very good player, it was very difficult to mark him as a younger player because he had pace, knew how to dribble and could score good goals.

The Olympic gold medallist also talked on how he frustrated his opponents during his time.

“Auxerre manager then Roux adopted the man-marking style and he usually assigned the toughest strikers to me because I was very strong. Once he assigned me to a striker, I would follow them anywhere, even down to their own goalposts.

“I was very difficult to play against and if you didn’t have the strength you would die because I would mark you out.”

‘I did nothing wrong’ – Asiedu Nketia justifies his presence in Parliament