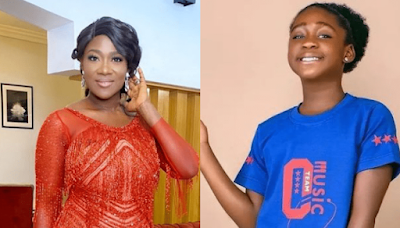 Nollywood actress, Mercy Johnson-Okojie has debunked rumours that she stormed her daughter’s school with thugs on Thursday.

The actress earlier on Friday revealed that a certain teacher in her daughter’s school was bullying her just because her mother was a celebrity.

“A teacher at my child’s school has been bullying my daughter constantly for two whole weeks. She tells her to her face that she does not like her mother, tells her that celebrity kids are badly behaved,” she wrote on her Instagram page.

She also added that on Thursday, in an altercation involving her daughter, Purity, and another student, the said teacher picked only her child for punishment.

According to her, she had to meet with the teacher after hearing her daughter’s account. While she tried to be polite with the teacher, the latter rudely replied and told her she could punish the student anytime she likes.

The mother of four also said she reported to the deputy Head Teacher in the absence of the Head Teacher and was waiting for response.

However, a certain Instagram user, @thenancychidera, who claimed to be an eye witness of Thursday’s incident, accused Mercy Johnson of harassing the school’s Head Teacher with thugs after her daughter was corrected for fighting another child during school hours.

On her Instagram stories, @thenancychidera, also alleged that during the “squabble”, Johnson-Okojie, “called her husband who in turn came to school with three hefty men to beat up the Head Teacher for supposedly disturbing his wife and child.”

In response to the allegations, the actress went live on Instagram while on a visit to the school. In the live video, Mercy speaking with the Head Teacher asked if they met on Thursday. The Head Teacher replied in the negative.

The school official answered “no” to all her questions, and affirmed that the Head Teacher was not on seat when the actress visited the school on Thursday.

“Are you people hearing that?” She said turning back to the camera. “Somebody went online and said I came with thugs and they beat up the Head Teacher, because we have money. That’s the hate. You don’t know the truth, you won’t keep quiet, and then you start to lie.”

Johnson also added that the said Teacher had been rude to her before the Thursday incident but she had decided to ignore it.

“Guys I’m sorry I have to go off now, I just wanted my team to understand the truth, the true nature of what happened, that has been cleared. I’m here with with the Teacher trying to sort out my issue,” she tearfully said before ending the video.