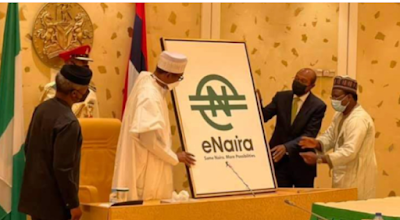 President Muhammadu Buhari says digital currency and its underlying technology, called blockchain, can increase Nigeria’s GDP by $29 billion over the next 10 years.

Speaking while unveiling eNaira on Monday in Abuja, Buhari said Nigeria’s digital currency will help move people and businesses from the informal into the formal sector, thereby increasing the tax base of the country.

He said eNaira would cater for businesses and households seeking faster and cheaper means of payment instead of “private currencies” that have gained popularity and acceptance across the world, including Nigeria.

“In recent times, Your Excellencies, the use of physical cash in conducting business and making payments has been on the decline. This trend has been exacerbated by the onset of the COVID-19 pandemic and the resurgence of a new Digital Economy,” Buhari said.

“Alongside these developments, businesses, households, and other economic agents have sought new means of making payments in the new circumstances.

“The absence of a swift and effective solution to these requirements, as well as fears that Central Banks’ actions sometimes lead to hyperinflation created the space for non-government entities to establish new forms of “private currencies” that seemed to have gained popularity and acceptance across the world, including here in Nigeria.

“In response to these developments, an overwhelming majority of Central Banks across the world have started to consider issuing digital currencies in order to cater for businesses and households seeking faster, safer, easier and cheaper means of payments.”

The president added that the benefits of digital currencies cut across different sectors of and concerns of the economy.

“Let me note that aside from the global trend to create Digital Currencies, we believe that there are Nigeria-specific benefits that cut across different sectors of and concerns of the economy,” he added.

“Alongside digital innovations, Central Bank Digital Currency (CBDC) can foster economic growth through better economic activities. Indeed, some estimates indicate that the adoption of CBDC and its underlying technology, called blockchain, can increase Nigeria’s GDP by US$29 billion over the next 10 years.

“It is on this basis that I am delighted to officially launch the Central Bank of Nigeria Digital Currency, called the eNaira, and in so doing, we have become the first country in Africa and one of the first in the world to introduce a Digital Currency to her citizens.”

Godwin Emefiele, governor of the CBN, in his speech, said the eNaira will make a significant positive difference to Nigeria and Nigerians.

The apex bank rolled out two applications for the digital currency on Monday — eNaira speed wallet and eNaira merchant wallet.