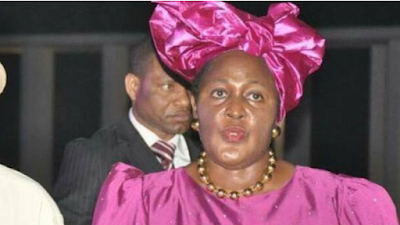 Mike Ozekhome, a senior advocate of Nigeria (SAN), says the raid on the residence of Mary Odili, a justice of the Supreme Court, could be politically motivated to embarrass her.

Security operatives had on Friday night invaded the justice’s house based on information that “illegal activities” were going on there.

The justice is the second in line to Ibrahim Tanko, the chief justice of Nigeria (CJN).

She is also the wife of Peter Odili, a former governor of Rivers state, and chieftain of the Peoples Democratic Party (PDP) who is currently on the watchlist of the Economic and Financial Crimes Commission (EFCC).

Ozekhome, who visited Odili’s house after the incident, said the raid could make Nigeria a laughing stock in the international community.

“She didn’t resist any search. I believe that they themselves would have found that they were committing terrible hara-kiri, that is, giving them the benefit of the doubt,” he said.

“The other theory which is also as powerful is that it is politically motivated, deliberately contrived as an artifice and designed to embarrass this cerebral justice of the supreme court and to embarrass her husband.

“Of course, the husband is a well-known PDP titan, and tomorrow is the PDP convention. Could it have been designed to rake up issues and make it look like they were trying to go after him so as to demoralise the delegates for tomorrow’s convention? That is another theory.

“But whatever theory, one thing is clear to me, we are gradually moving towards the precipice of calling ourselves a banana republic. Nowhere in the world would secret agents just bump into the house of a justice of the supreme court and a former governor with an empty search warrant with no name written on it.”

Dino Melaye speaks on calls to defect from PDP to APC

‘For Better For Worse’ was inspired by an American movie – KiDi

Ghana could secure funding from IMF in 8 months’ time – Report

My husband stopped being intimate with me for 9 years; now he wants it – Emotionally troubled woman seeks advice