LaLiga: Xavi names 5 Barcelona players he will “push the hardest’ 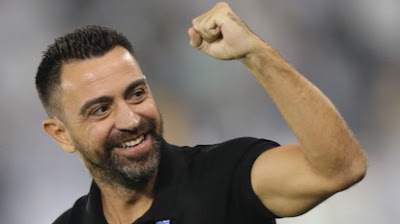 New Barcelona head coach, Xavi Hernandez, has insisted that his friendships with former teammates will be a hindrance.

The former midfielder was officially unveiled as Ronald Koeman’s successor on Monday.

According to him, it is an “advantage” to have played with Jordi Alba, Sergi Roberto, Marc-Andre ter Stegen, Gerard Pique and Sergio Busquets.

However, they are the ones he will push the hardest.

“For me, it’s an advantage to have the relationship I have with Gerard [Pique], [Sergio] Busquets, Jordi Alba, Sergi [Roberto] and Marc-Andre ter Stegen.

“Everyone starts from zero but the players that I know are the ones I will push the hardest. I want them to be the leaders and to take the bull by the horns at times,” he said.

CHECKOUT:   We are developing Ada Songor Lagoon for the people of Ada – McDan Group

His first game as manager will be against Espanyol after the international break on November 20.

Three days later they host Benfica in the Champions League, knowing that a win will secure their place in the knockout stages of the competition.

“They said I burnt police station, but I didn’t do anything” – Mother of four arrested and detained speaks