Afenifere will pressure Buhari to actualise restructuring before 2023 –Adebanjo 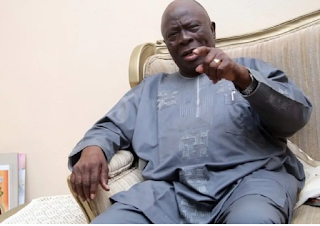 Leader of Yoruba socio-political group, Afenifere, Chief Ayo Adebanjo, on Thursday, said his group will pressure the President, Muhammadu Buhari to realise the restructuring of the country before the 2023 general elections.

The 93-year-old chieftain stated this while addressing the press at the Wheat Baker Hotel in the Ikoyi area of Lagos State.

Adebanjo said he “owe it to posterity, to speak unalloyed truth to unconscionable powers, and to clarify the position of my people, the Yoruba of the Nigerian state, so that whenever I might be recalled home, it shall be said of me, that I not only did my bit, I indeed said my bit, and the position of the Yoruba people and Afenifere, were clearly and succinctly enunciated.”

He lamented that despite initial agreement to restructure Nigeria before Buhari was elected into office in 2015, the ex-military head of state has refused to heed the call of the people on restructuring, devolution of powers, fiscal federalism and state police.

The Afenifere leader said, “We are not anarchists, we are not secessionists, we are democrats. We recognise that there is a democratically elected President in Aso Rock. We are not asking for Buhari’s resignation, and since the National Assembly has not seen fit to impeach him, he remains the President of Nigeria until the 29th of May, 2023. But it is the considered position of Afenifere that he urgently constitutes a Government Of National Unity, charged with the sole task of seeing to the restructuring of Nigeria, in consultation with the Nigerian peoples.”

CHECKOUT:   Again, Kiddwaya ''boasts about being a billionaire's son''

“Let it be heard loud and clear; Afenifere shall be leading the Yoruba people to demand substantial restructuring before any fraudulent elections might be held in 2023, and the response of the Buhari regime to these equitable demands for restructuring the country along federalist lines, in order to restore it to its roots and original agreements, shall go a long way in shaping the position of the Yoruba people in the future, but let it be heard loud and clear; Nigeria is not only negotiable, it is evidently dying,” he added.

Man charged with threatening to kill US President, Joe Biden