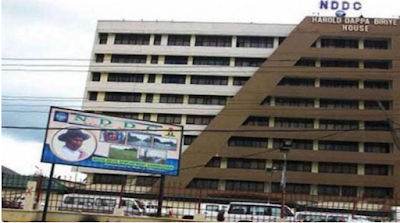 Benjamin Okaba, president of the Ijaw National Congress (INC), has described the bill seeking to add Lagos, Kogi and Bauchi to the Niger Delta Development Commission (NDDC) as a “mockery” of the region’s essence.

The bill seeking to include the three states as part of the Niger Delta Development Commission (NDDC) passed the second reading at the senate last Thursday.

It has since become a polarising topic of debate among stakeholders in the country.

Adding his voice to the debate, Okaba, in a chat with Arise TV on Monday, said the bill is “unacceptable” because the NDDC “has a clear geographical definition and characterisation”.

He said other oil-bearing states outside the region should only get the 13 percent derivation given to oil-producing areas but not included in the commission.

CHECKOUT:   Delta High Court Judge weeps as DNA reveals he is not the father of his three adult children

“The NDDC, in the first instance, has a clear geographical definition and characterisation. It’s not about oil-bearing. And to understand all of these, we need to go back far into history, from the reports of the Willinks commission that recognised the peculiarity of the region –the major challenges and therefore recommended the establishment of a board that will alleviate the fears of the people and act as a special agency for the rapid development of people of the region. At this time when this recommendation was made, there was no oil,” the INC president said.

“Then we now have the NDDC in 2000 to cater for the mandate of the region. The NDDC act provides for, in addition to the 13 percent derivation, another 10 percent to address the challenges of the people. Around that time, when states that was not part of the region were included, people protested.

“We have a natural area called the Niger Delta, and the politicisation of the Niger Delta is unacceptable. And we foresaw further bastardisation. The inclusion is to say that what was envisaged long ago is coming to pass. The point we are making is that if oil is now found in other places, there’s a law that says that for oil-producing land, 13 percent should be given to them. But that should not qualify them as Niger Delta. This is a bastardisation and unacceptable to us. It’s making a mockery of our essence.”

BBNaija S6: Why I don’t want to be teammates with Maria again – Whitemoney