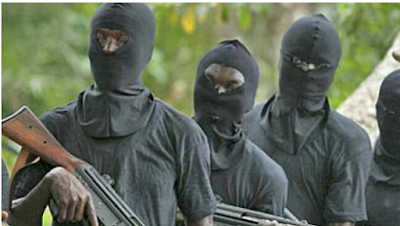 Gunmen broke into Ikpomolokpo palace in Gege ward of Ado Local Government Area in Benue State in the early hours of Monday, killing the son of the monarch while his daughter was whisked away.

Witnesses said the gunmen stormed the community about 2am and headed to the palace of the clan head where they wreaked havoc.

The villagers said that they heard gunshots severally from the residence of the clan head but could not intervene because they themselves were helpless.

Chairman of Ado LGA, Chief James Oche, confirmed the incident to journalists in Makurdi, saying he received a distress call on the incident.

“The young man told them that he did not know the whereabouts of his mother and they  shot him dead and they now took the sister away,” he said.

The council chairman added that he immediately alerted troops of Operation Whirl Stroke (OPWS) but before they could get to the palace, the gunmen had escaped into the Atiga forest in the area.

Oche said the troops were already trailing the culprits with the aim of apprehending them and rescuing the abductee.

Police Public Relations Officer (PPRO) in Benue, DSP Catherine Anene, was unreachable as of press time as her telephone line was switched off.