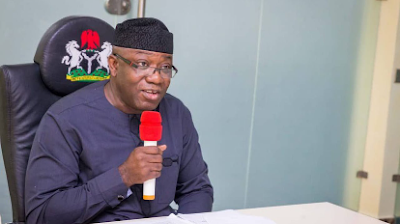 The Acting State Chairman, African Action Congress, Mr Dare Adekolu, on Tuesday, tackled the All Progressives Congress of Governor Kayode Fayemi over alleged failure to meet the people’s yearning in the area of infrastructure.

Adekolu, who said the failure of the APC government to meet the people’s basic and social needs had made a positive alternative a necessity, assuring that his party had come to provide the missing link.

The AAC boss, who spoke in Ado Ekiti while inaugurating the interim State Executive Committee of the party and the State Mobilisation Committee said, “When those basic needs are not there, people will yearn for alternatives as they are now.

“The APC has failed the people. There is infrastructure decay in Ekiti State. Look at all our roads intra-city, inter-city and inter-state, everything is in bad shape. If you go to the rural areas, you will see that most of the roads have been neglected.

“Even for farmers to convey their produce from the farm to the markets is a big problem. When those basic needs are not there, people will yearn for alternatives as they are doing now.

CHECKOUT:   Your refusal to pay soldiers led to their withdrawal from checkpoints – PDP tells Akeredolu

“Look at what is happening in the area of economy, people are getting poorer, investments are going down, the enabling environment is not there. It is the same with the security situation, when there is no security, people are even afraid to go to their farms, the result is food shortage which is already setting in, food prices are soaring.

“The essence of governance is to create enabling environment for businesses and also to meet the basic and social needs of the people like a good education. But all these are missing now. That is why we are not joking with the calibre of governorship candidates we will present for the election.

“God is preparing AAC as the vehicle that will produce the next governor of the state. Apart from integrity, proficiency, competence and sellable personality, our candidate must be business-oriented and as well governance-oriented so that he can manage the state with the right drive. We are rest assured that to the glory of God, there are so many competent hands in Ekiti State.

But the APC State Publicity Secretary, Segun Dipe, dismissed AAC, saying, “We can only sympathise with them that they don’t have what to campaign with. Of course, we don’t know them, we don’t know where their office is, we don’t know their executives and what they want to push for, but by and large, they are just joining the crowd of ‘crucify him’.

“They are talking without basis. They are not speaking the truth and they don’t have any facts. The roads which went bad all over Nigeria during the rainy season are now being taken care of. To a large extent, the roads in Ekiti State are coming back good.

“The AAC is just copying what other people have said in the past, unfortunately, they are late in saying it because we all know that there is no infrastructure decay in Ekiti State,” Dipe said.