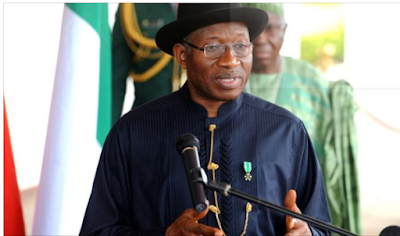 Former President Goodluck Jonathan says he convened the 2014 national conference to address issues causing division in the polity at the time.

Jonathan said this on Tuesday in his remarks at the ‘2nd Igbo Nsukka Zik Annual Merit Award’ event, held in memory of Nnamdi Azikiwe, first president of Nigeria.

The event, which held in Abuja, was organised by Igbo Nsukka United Front, a socio-political group.

Jonathan, who was honored with the Zik merit award, said more measures need to be taken to properly manage Nigeria’s diversity.

“When I convened the 2014 national conference as president, my intention was to create an environment that would enable our citizens to dispassionately address those issues that are pushing us towards divisive politics and sowing the seeds of discord in our polity,” he said.

“I believe that in a complex and diverse country like ours, the journey of nationhood and march to greatness is not a sprint but a marathon.

“However, to get it right, we need to do more to unite our people and integrate our society, in order to build a nation of selfless patriots and citizens — citizens as defined by the Greek philosophers. That is the type of country envisioned by our nationalists.

“That is the only way to turn our huge population, rich diversity and the outstanding resourcefulness of our people into a positive force that would transform and enhance the greatness of our dear country.

“I have no doubt in my mind that God Almighty has deposited in our land and in our citizens, the indefatigable spirit and creativity to unite, work and relate in a harmonious way and make our country great.”

He also praised the qualities of Azikiwe, describing him as an inspiration for good governance, adding that Azikiwe, Obafemi Awolowo, Ahmadu Bello, Anthony Enahoro, Abubakar Tafawa Balewa and other nationalists did their best to project a positive image for the country.

“The nation owes Nnamdi Azikiwe, the first president of Nigeria who was in office from 1963 to 1966, a debt of gratitude,” he said.

“His outstanding role while working with other great nationalists to secure the independence we enjoy today was legendary.

“Nigerians of different generations will continue to remember his extraordinary efforts towards keeping Nigeria one, and his belief in Nigeria’s greatness anchored on equity, justice and inclusion.

“Whether as a political leader, author, journalist and media owner, Zik was sincere in his consistent rhetoric about freedom and economic emancipation. He spent most of his life fighting for the progress of this country and the well-being of her people.

“It is, therefore, a thing of great significance that this group chose this very special day to evoke the nationalist spirit and principles of Azikiwe and restore to our consciousness, those ideals that raised our optimism about a cohesive and peaceful nation.”