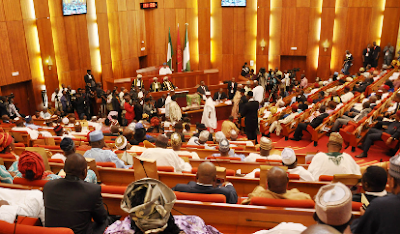 The Senate has ordered an investigation into the remote and immediate causes of the gas explosion at Ladipo Spare Parts Market, in Mushin Local Government Area of Lagos, which led to the death of at least five persons, including a 10-year-old boy.

This followed the passage of a motion of urgent public importance moved by Senator Solomon Adeola, APC Senator, representing Lagos West Senatorial District of the state, calling the attention of the Senate to yet another explosion in his district resulting in fatalities.

The Senate directed its committees on Petroleum Downstream and Gas to investigate the explosion with a view to preventing future occurrences.

The Senator, in a statement signed by his Media Adviser, Chief Kayode Odunaro, noted that there has been a recurrence of similar explosions in recent times in the same area in his senatorial district as happened in 2016, 2018 (Abule-Egba), 2019 (Abule–Egba), 2020 (Ijegun) and 2020 (Ile-Epo, Oke-Odo), also in 2020 (Abule-Ado), stressing that Nigerians resident in all the densely populated areas where these explosions occurred now live in fear of not only losing properties and investment but their lives and those of love ones from these frequent explosive fire disasters.

The Senate observed a minute silence in honour of the innocent Nigerians that lost their lives in the inferno and directed NEMA, the Federal Ministry of Humanitarian Affairs, Disaster Management and Social Development, to immediately send relief materials to affected victims and offset medical bills of those hospitalized.

It was gathered that five persons, including a 10-year old boy, lost their lives following the explosion at an industrial gas retailing outlet in Ladipo Spare Parts Market, Lagos.

Farinloye said the cause of the explosion, which occurred on Tuesday morning at the shop located at 33/35 Ojekunle St. Ladipo Spare Parts Market, Lagos was yet to be ascertained.