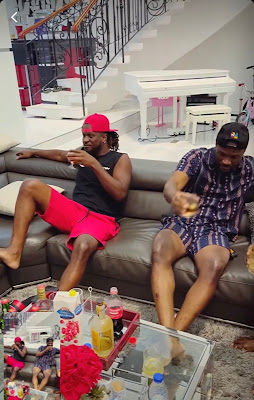 Peter Okoye of defunct Psquare group has confirmed reconciliation with his twin and elder brother, Jude.

Recall that a few days ago, social media was agog with news of the twins reconciling after they followed each other on Instagram.

On Thursday, Paul took to Instagram page congratulating Peter and his wife on their anniversary.

It didn’t end there as Peter on Thursday night shared a video of him with his brothers, Paul and Jude Okoye dining and laughing together in his home.

Fans have taken to social media to express joy about their reconciliation.

This development is coming as the twins celebrate their 40th birthday. They were born on November 18th.

Recall that Peter and Psquare split sometime in 2017 following family and personal issues.

Since then they have produced songs individually and continued to avoid each other.