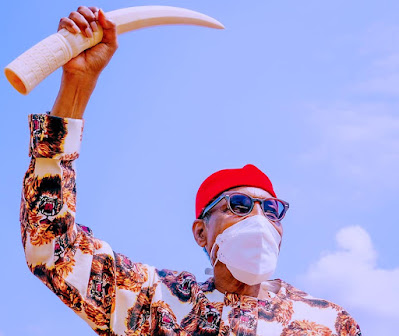 The President, Muhammadu Buhari on Friday met with a delegation of leaders and chiefs from the south-east region of the country.

He received the delegation comprising traditional and religious leaders of the Igbo extraction at the State House in Abuja.

Others are Minister of Labour and Employment, Chris Ngige; Minister of Foreign Affairs, Geoffrey Onyeama; and Minister of State for Education, Chukwuemeka Nwajiuba.

Details of the meeting were not disclosed as the delegation declined to Speak with State House Correspondents afterwards.

Nevertheless, it may not be disputed that the leaders discussed the security situation of the Southeast.

Another likely issue on the agenda could be the arrest, ongoing detention and prosecution of the leader of the Indigenous people of Biafra, Nnamdi Kanu.

Seyi Makinde not fair to me, Oyo Deputy Governor cries out

Sanwo-Olu hosts Ikorodu Bois, says ”we are proud of you”