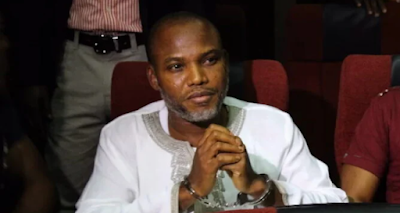 The High Court of Abia has barred security agents from denying members of the public access to any courtroom or court premises during the trial of the detained leader of the proscribed Indigenous People of Biafra, Nnamdi Kanu.

He also restrained the Department of State Services, the Nigeria Police Force and other security outfits from barricading court premises and access roads leading to courts during the IPOB leader’s trial.

Security agents had barred some Igbo leaders and IPOB followers from court proceedings in recent times. Kanu’s lawyers had also been prevented from entering Justice Binta Nyako court in Abuja earlier in November.

However, Justice Anya on Friday ordered as follows”

“That security agents are hereby restrained from barricading and blocking access road to the High Court of Abia State or that of any court of law unless the head of court so requests so in writing.

“That there must not be any arrest in the premises and vicinity of any court particularly in this court except as ordered by a court of competent jurisdiction.

“That legal practitioners, litigants, and members of the public must be allowed free access to the court without let or hindrance.

“That in the administration of justice only the prison officials and policemen posted on official court duties are allowed within the court of law and it is so ordered.”

The judge said that it was unconstitutional and illegal to militarise the court premises. He further ordered that the Federal Government must uphold the sanctity of the judiciary, the freedom and constitutional rights of the people.

Kanu, 54, was born on September 25, 1967, at Afaraukwu, Abia State. He had earlier jumped bail in June 2018 before leaving for the United Kingdom though he said that he fled because his life was no longer safe in Nigeria.

After about three years abroad, the Attorney General of the Federation and Minister of Justice, Abubakar Malami (SAN), at a press briefing in Abuja on June 29, 2021, announced that the IPOB leader was re-arrested in a foreign country and extradited to Nigeria.

His lawyers had said the IPOB leader was re-arrested in Kenya and whisked to Nigeria.

Upon his re-arrest and extradition in June 2021, he was re-arraigned before Justice Binta Nyako for terrorism-related charges and has since been remanded in the DSS custody in Abuja.