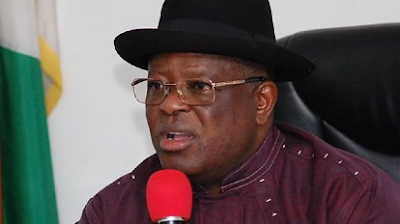 The Governor of Ebonyi State, David Umahi has reacted to the alleged abduction of some engineers constructing ring roads in the eight local government areas of the state, directed for immediate suspension of Effium axis that was engulfed by crisis.

UMAHI made this known while addressing journalists shortly after an enlarged executive council meeting in Abakaliki, the state capital.

Recall that five(5) workers of the company handling the ring road were reportedly abducted a month ago by unknown gunmen who allegedly demanded a ransom of N50,000 and later did not release the victims.

Governor Umahi said: “The entire Ring road project is being threatened and I will be willing to shut down any of the sections that will not comply with my directive today. Firstly, I need a sworn affidavit from all the traditional rulers, Town Union Presidents, Chairmen of the local government and coordinators Where the roads are passing to be crafted by the SSG and HAG. The affidavit will be that they will take responsibility for the security of the contractors, consultants, everyone involved in the discharge of their duties and also their equipments.

“Anyone I do not get after seven days, no negotiation, I will shut down that section and it will never be reopened on account of security. The contractors should also stop being very funny and approach the issues . You have to appoint liaison officer in all the communities the project is passing through in your section, and you will not choose by yourself. The people that sworn the affidavit are the people that will be put as liaison officers . They will also give a local vigilante and this local vigilante will be two.

“The second aspect is the Police and Army security, any contractor who failed to comply with this will leave the site. Time has come for the project unit and the consultants and contractors to go back to CP, to discuss the security requirements with Army.

“On the Effium axis, I am suspending all operation on the site there for the next seven days. We will want similar commitment from the stakeholders there. 20 People from Effium and 20 people from Effium Ezza side that will get committed together with the traditional rulers, Town Union Presidents, Chairmen and coordinators that will get commitment that we can return to site” he said.

The Governor, however, debunked rumours making the rounds that there is insecurity in Ebonyi. “So far, we have not had record of insecurity in the axis of 135 -Ezza North, Ezza North to Ezza South- Ikwo-Abakaliki-Izzi-Ebonyi LGA. Where we believe we have problems will be the axis of Effium in Ohaukwu LGA” he added.