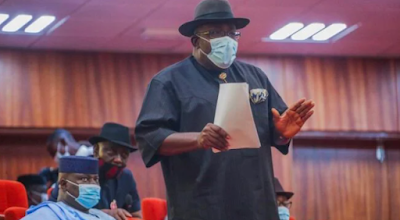 A federal high court in Yenagoa, Bayelsa state, has given an order of perpetual injunction restraining the Economic and Financial Crimes Commission (EFCC) from prosecuting Seriake Dickson, former Bayelsa governor.

In August, the EFCC quizzed the senator representing Bayelsa west for hours over alleged corruption and abuse of office.

Dickson is alleged to have mismanaged about N1 trillion while he was governor of the state — an allegation he denied. He said the petition submitted at the anti-graft agency’s office against him is “frivolous”.

“For the avoidance of doubts, let me state that my family investments, Seriake Dickson Trust Incorporated, were made between 1996 and 2012 before I became governor,” the lawmaker had said.

“These investments were funded by loans and advances and repaid from salaries, allowances, savings and others. One of them is still on mortgage and I have made these documents available to the EFCC.”

In a judgment, Isah Dashien, the judge, held the assets acquired with loans, had been declared at the Code of Conduct Bureau (CCB).

“Therefore it was contrary to the stipulation of the law for the EFCC to open investigation into assets that were declared over the years before the relevant body, the CCB, and for which the CCB issued verification certificates,” Dashien said.

CHECKOUT:   Okonjo-Iweala: Without Buhari’s intervention, I may never have emerged WTO DG

One of the orders seen in the certified true copy of the judgment reads: “That an order of perpetual injunction restraining the defendant, its officers, men, agents or privies from inviting or further inviting the 2nd Plaintiff (Dickson), officers, managers or Trustees of the 1st plaintiff (trust) for investigation and from investigating or prosecuting the 2nd plaintiff, any officer, manager or trustee of the 1st plaintiff over any matter dealing with or relating to any investment made by the 1st plaintiff, as covered or affected by the said Judgment of the Federal High Court in suit number FHC/YNG/CS/40/ 2020.”