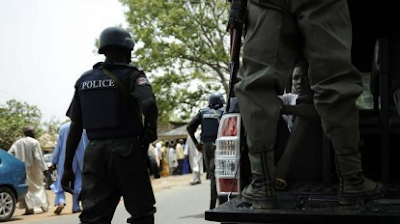 One Tunde Esuruoso, who the police identified as a notorious member of the dreaded Eiye confraternity, was on Monday arrested, “while attacking lodgers at a located at the Obantoko area of Abeokuta.

It was gathered that the police at the Obantoko divisional headquarters had received a distress call that the hotel was being attacked by cultists.

Consequently, the DPO of Obantoko, SP Ignatius Alimiekena, mobilized his patrol team to the scene, cordoned off the premises, making it difficult for the hoodlums, who had mingled with lodgers, to get out of the premises.

CHECKOUT:   Suspected herdsmen hack another girl to death in Ogun

Confirming the incident, the Ogun State Public Relations Officer, Abimbola Oyeyemi, said there was a thorough search conducted on everyone within the premises, adding that “a locally fabricated double-barrel shotgun with one expended cartridge was found on Esuruoso.”