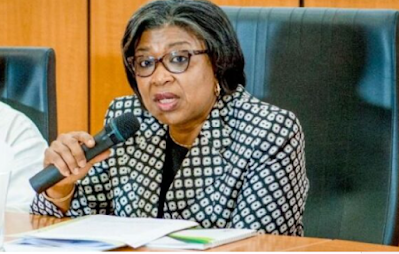 Oniha disclosed this at a workshop on executive leadership organised for the senate committee on local and foreign debts and the house committee on aids, loans and debt management, on Monday, in Niger state.

According to the DMO DG, public debt was instrumental in helping Nigeria bounce back from the recession caused by economic shocks, which put a strain on the country’s revenue.

She added that government understands the need for caution when borrowing, especially with mounting public debt and rapidly increasing debt service obligations.

“It is true that the public debt has been growing. We should remember that Nigeria has witnessed economic shocks with major impacts on revenue that have resulted in recession twice, and borrowing was a major tool for reversing the trends,” Oniha said.

CHECKOUT:   "I bought my home with my hard earned money before BBN"- Ka3na subtly shades Nengi

“However, going forward, there should be a strong emphasis on revenue generation from multiple sources other than crude oil to ensure that debt is sustainable.”

According to her, those initiatives that have been introduced to finance capital projects through Public-Private Partnerships should be sustained to curtail the need for direct borrowing by the government to fund infrastructure projects.

She informed that since 2017, when the DMO started issuing Sukuk on behalf of the federal government, over N365 billion proceeds have been realised in the issuances, while over $12 million worth of Eurobond has been issued since 2011.

Clifford Ordia, chairman, senate committee on local and foreign debts, in his keynote address, explained that debt is a veritable tool for economic growth and development if properly managed.

He, however, said that effective debt management that emphasises transparency, due process, and fiscal discipline can precipitate a turnaround in the economy.

According to him, a clearly defined policy must be articulated or reviewed by government to streamline projects that loans can be obtained.

“As a Committee, we will give priority to projects that will develop human capital and critical infrastructure that has the potential to generate revenue and create employment”, he said