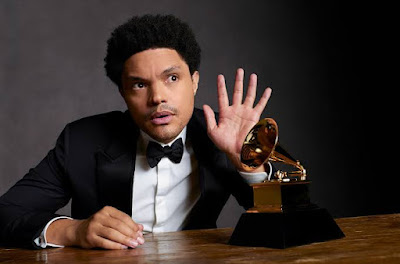 South African comedian and TV show host, Trevor Noah, has announced he will be hosting the 64th Grammy Awards show 2022.

He made the announcement on December 1, at the CBS Morning’s show saying “this year, the Grammys is gonna be back, It’s gonna be like, the full show, everybody’s gonna be there. We’re excited to celebrate a record night and I am lucky to host.”

Recounting his experience as the 63rd Grammy award host held outside next to the Staples Center in Los Angeles without an audience due to COVID-19, Trevor says “it was fun”.

The comedian revealed he did not hesitate to accept the offer when it came again saying, “I said, ‘Let me think about it,’ and then I was like, ‘Why would I not want to do the Grammys?”.

He jokingly sheds light on the tricky duties he looks forward to carrying out as the host.

“As a host, I serve so many purposes. Like if I’m not there, who lifts Kevin Hart into his seat? There are important things that I’m supposed to be doing on that night. I give JAY-Z emotional support, he’s very nervous… I’m there to give people the moral support that they need all night” he said.

Beautiful new photo of BBNaija’s Mike Edwards and his family

Nigeria vs Tunisia: Eguavoen thanks Okocha, Kanu, Oliseh, others, speaks on payment of allowances